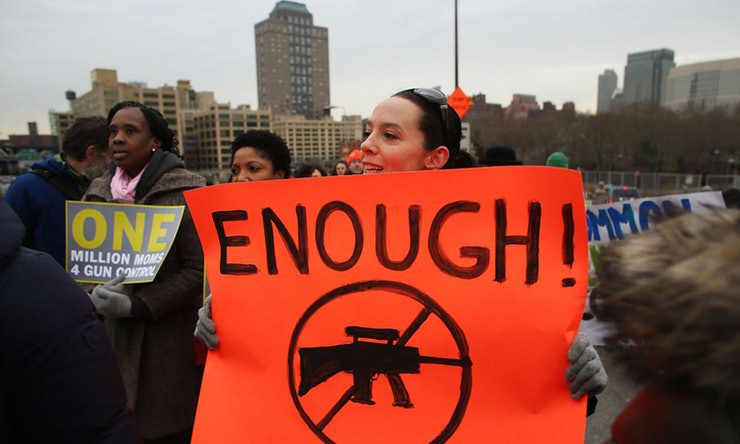 There’s always a pattern to the news after a mass shooting in America, and I usually tend to just tone it out because it’s become so redundant and predictable: lots of ‘thoughts and prayers’, lots of people calling for gun control laws, lots of people saying its too soon to politicize an event, and after a few days, it all days down because some new shiny object catches our attention.

This time appears to be different; the survivors of the Marjory Stoneman Douglas High School shooting have become cult heroes and continued to press the issue, keeping it in the media cycles long after other shootings had fallen to the wayside.  And major props to those kids.  What they’ve been able to do – the giant ‘Fuck You’ that they’ve thrown to politicians and conservative, gun-loving ‘news’ commentators – has been amazing to watch from afar.

I know I’m not the first to say it or agree with them, but there’s a palatable sense of ‘finally, someone is calling them on their bullshit’ when the survivors speak.  I feel bad calling them kids, even though they refer to themselves that way, because they are acting more like adults than the politicians and professionals and commentators that get the attention after these shootings. As much as I agree with and enjoy watching a Rachel Maddow or a Chris Hayes, they would never straight up say, ‘I call bull shit on that’ the way these survivors have.  In the words of Drew Magary, I’m behind you 100%, throwing up double middle fingers with the rest of you.

One thing that does confuse me about the gun debate in America, though, is that it always seems to be about gun ‘control’.  How do we regulate the number of guns in America?  There are lots of standard ideas – background checks, ban assault weapons, the ‘gun show loophole’, etc. While most of these are wildly popular among the public, they never actually go anywhere.  After Sandy Hook, when elementary-age kids were murdered, these laws couldn’t get passed.  It’s a long shot that they get passed now.

There is some evidence that these would reduce gun violence – the assault weapons ban from 1994 to 2004 provides some proof – but I think we are tackling this from the wrong angle.

The problem with this topic only coming up after a highly publicized mass shooting is that we focus on solutions for that particular mass shooting.  Arm the teachers! (Which is a master class in distracting from the issue.  Now we’re talking about more armed cops in schools instead of armed teachers, instead of pointing out that Las Vegas didn’t happen at a school, Pulse didn’t happen at a school, or that Fort Hood was a mother fuckin’ military base.  What are we are going to do, have armed guards everywhere?  Arm the cleaning crew at the Mandalay Bay?  Have DJ Skrillex pack a couple glocks under the turn tables in case shit goes bad?  It’s such an absurd notion but instead of dismissing it, ‘we’ – as in, Americans in general – get distracted by the shiny object and lose focus on the bigger problem.)  Background checks!  Ban the AR-15!  These are narrow solutions focusing on only a small fraction of the gun deaths that occur in America every year.

(The stats mentioned below are all from the FiveThirtyEight feature on gun violence – explore for yourself here.)

33,000 people are killed by guns in America every year.  Two-thirds of those are from – wait for it – suicides.  Not mass shootings, not terrorism, and certainly not ‘Chicago’.  So when we talk about ‘gun control’, the solutions proposed – banning assault rifles, background checks, waiting periods, etc. – they are likely to have zero impact (except for maybe waiting periods) on, by far, the number one cause of death by guns.  But we never talk about that when we talk about ‘gun control’.  What we really want to talk about is preventing the issue that shows up on our TV, not preventing the issue full stop.

We can all recite the gun-advocates defenses by heart – what about hunters?  what about self-defense or protecting my family from a burglar?  A good guy with a gun stops a bad gun with a gun.

Fuck your hunting.  Why does that need to be a thing?  You don’t need to hunt food to survive.  Is hunting or protecting your family from a burglar more important to you than making sure your 6-year-old doesn’t accidentally shoot themselves?  You know what kills more people than mass shootings and terrorism combined?  Accidental shootings.  That’s right, by being some jackass that wants to get up at the ass-crack of dawn and dress in goofy clothes so the big bad quail doesn’t see you, you’re actually putting your friends and family at a greater risk than if you didn’t have guns at all (and therefore left yourself open to the big bad boogey man who might rob your house).

Liberals (although based on polls its not just ‘liberals’) have already lost this argument because its always phrased as gun ‘control’.  Starting from a compromised position is democrats’ modus operandi.  Global warming should have been phrased as climate change from the start.  Gun control should have been phrased as gun eradication from the start.  We do want to take your guns.  It’s the only way to actually solve the problem.  All the other measures are half-measures.  Let’s say assault weapons are banned, and background checks are introduced, and waiting periods.  There will still be gun deaths.  There will still be mass shootings.  And then what will the gun nuts say, ‘see, told you, we need more guns, not less.’  And everyone will believe them because people are stupid.

It frustrates me that no politician ever runs on a platform to ban the 2nd Amendment.  And not just ban the 2nd Amendment, but collect people’s guns and melt them down.  The gun nuts are already worried about that whenever ‘gun control’ is mentioned anyway.  Why not actually propose the idea to do it?  People who are tired of ‘thoughts and prayers’ but also know that background checks aren’t really the solution either might actually get excited and actually vote.

Here’s an idea –  run on a platform to pass a constitutional amendment to override the 2nd Amendment, and include legalizing marijuana in the platform.  These are both things supported by a majority of Americans, but they are also things that politicians in America never say.  A platform like this could actually excite voters and motivate them – much more so than another round of Medicare For All debates would.

Something needs to be done differently this time – we’ve already seen gun control bills fail following the shooting in Parkland.  Hell, we’ve already had another school shooting since then at Central Michigan.  Perhaps a new strategy, and a new message besides thoughts and prayers and common sense, would help actually prevent gun deaths – and not just school shootings, but all gun deaths.

One thought on “Guns, Guns Everywhere”